One of the prevailing influences or “spirits of the age” in our times attempts to govern behavior and life itself  thru commerce and commercial incentive.  This motivation has a final destination in mind and it is not a good one.  You students of the book of Revelation will, no doubt, “get my drift.”

We will need to fight in order to overcome this, to be led, not by money, but by the will of God.

How can we be in this world and not of it?  How can we transcend the realm around us, all the while engaged and contributing, to be those who can truly say with Jesus, I have overcome the world.

The prince of this world is coming, and he has nothing in me, Jesus said.  I would also like to be able to truly say this, and being able to say it truthfully will become of ultimate importance in the days that lie just ahead of you and I.

Occasionally, I will watch an MMA fight, though I don’t consider myself a fan.  Several months back I saw a fight with a champion who has been said to be a Christian.  I believe I recognized a spirit on this guy that is from God.  That surprised me, and made me think about our calling.

In Christ, we are called as warriors, but the culture and other influences are trying to domesticate us.  For most of us, there is little or no outlet for the warrior within, this calling we have as warriors.  I think this calling is largely misunderstood.  I don’t hear much about it, except in random reference that seems purely for inspirational purposes.  Should we feel gratified to have a warrior calling that we never use?

King David was a man after God’s own heart, and his life as a warrior was the stuff of legend.  How is it that we can engage this calling as warriors?  How can we engage the real fight, the one that we are destined to, the one with consequence today, and in eternity?  What would David’s life, as a warrior, look like if he were living in our times?  Resist the urge to respond before you contemplate this for a moment.  Would he be an MMA fighter?

God’s warriors of old  were people whose lives were an expression of epic faith.  Today, we want to be known for having epic faith.  The gulf between those two positions can not be exaggerated.

What is epic faith, and how can we recognize it when it is on display?

Once you are born again, you are qualified with the capacity to see the kingdom of God, but that is not a guarantee that you will see it, or engage the fight that is raging all around you, answering your warrior calling.  It remains possible to see everything naturally and continue to live as (what 1st Corinthians calls – click here for reference) mere men.  The natural man cannot see the things of the Spirit of God.  They are foolishness to him.  This is not only talking about people who are not born from above, but also those who are born from above, but who fail to walk in the Spirit.  Bible students will probably think of Elisha’s servant at this moment.

Jesus said that we bring our father’s guilt into full measure when we build monuments for the prophets who came before us – those who demonstrated epic faith – when we don’t live according to their example.  This is important for us to recognize.  So it is not the celebration of or the building of monuments to the champions of the past that demonstrates that we epic faith.  Such things can actually work against us, because we can identify with these champions without actually living like them in any way.  Identification can be gratifying, but it can also be deceiving!  It is not a good idea to laud the prophets of the past (or even of the present) if you’re not also willing to live by their example because it only makes you guilty of perpetuating things God has declared war against.

If today’s church does not recapture the sacrificial spirit of the early church, it will lose its authenticity, forfeit the loyalty of millions, and be dismissed as an irrelevant social club with no meaning for the twentieth century.

Allow Him to be the source of all your dreams, joys, and delights, and be careful to go and obey what He has said.

Wisdom is vindicated by all her children.

We are life long students of the ways of God; trouble starts when we think we have graduated. 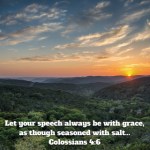 Fallen man is not simply an imperfect creature who needs improvement: he is a rebel who must lay down his arms.