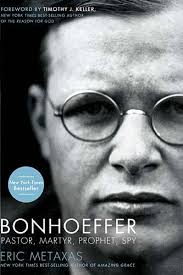 I am reading the book Bonhoeffer; Pastor, Martyr, Prophet, Spy by Eric Metaxas.  Click on the photo to see it on Amazon.  Kathy bought it for me for my birthday.  She is sweet.  It seems at this point to be thorough, and I am sure it will take a while to get through it’s 542 pages. It makes me think, already, while only 42 pages in, of those who have gone before us. END_OF_DOCUMENT_TOKEN_TO_BE_REPLACED

NEW YORK – Peter F. Drucker was born 95 years ago today–can it be possible?–in Vienna. The universally known writer, thinker and lecturer now is nearly deaf and doesn’t get around like he used to. He stopped giving media interviews about a year ago. But in late October, Drucker granted an exception to Forbes.com at the urging of Dr. Rick Warren, the founder and head of the Christian evangelical Saddleback Community Church in Lake Forest, Calif.

Peter F. Drucker at his home in California
The Drucker-Warren relationship may surprise many readers, but it goes back two decades, to when the young minister came to Drucker for advice. Under Drucker’s tutelage, Warren’s own success as a spiritual entrepreneur has been considerable. Saddleback has grown to 15,000 members and has helped start another 60 churches throughout the world. Warren’s 2001 book, The Purpose-Driven Life, is this decade’s best seller with 19.5 million copies sold so far and compiling at the rate of 500,000 per month. END_OF_DOCUMENT_TOKEN_TO_BE_REPLACED

The world is deathly ill. It is dying. The Great Physician has already signed the death certificate. Yet there is still a great work for Christians to do. They are to be streams of living water, channels of mercy to those who are still in the world. It is possible for them to do this because they are overcomers.

Christians are ambassadors for Christ. They are representatives from Heaven to this dying world. And because of our presence here, things will change.

My sister, Betsy, and I were in the Nazi concentration camp at Ravensbruck because we committed the crime of loving Jews. Seven hundred of us from Holland, France, Russia, Poland and Belgium were herded into a room built for two hundred. As far as I knew, Betsy and I were the only two representatives of Heaven in that room. END_OF_DOCUMENT_TOKEN_TO_BE_REPLACED

A Schopenhauer
Submit a fav quote to info @ fxmissions(dot)com!

We are all weak and broken people, but often we are out of touch with our neediness.

One repays a teacher badly if one always remains a pupil only.

In so many ways, we are still looking for independent legitimacy, just like our forbears at the tower of Babel…. to make a name for ourselves.

If our goals eclipse our  relationships we have the wrong goals.

For every child of God defeats this evil world, and we achieve this victory through our faith.

Most political sermons teach the congregation nothing, except what newspapers are taken at the rectory.

There are three essentials to leadership: humility, clarity and courage.

There is no sin your not capable of given the right circumstances. Show me your friends, I’ll show you your future.